I think you will really love these apple cinnamon muffins.

The recipe was originally shared with us by Cheryl from Ontario, Canada, who calls these her apple pie muffins because they have all the yummyness of cinnamon apple pie.

This recipe was originally shared with us by Cheryl from Ontario, Canada, who calls these her apple pie muffins because they have all the yummyness of cinnamon apple pie.
Print Recipe Pin Recipe Add to My Recipes Go to Collections
Prep Time 15 mins
Cook Time 25 mins
Total Time 40 mins
Course Breakfast, Dessert, Snack
Cuisine American
Servings 12 Servings
Calories 436 kcal

There are several things you can do to make this recipe healthier.

You can also cut down on the sugar in this recipe in two ways:

1. I would cut the sugar in the actual recipe from 1 1/4 cups to 1 cup, and if that was satisfactory to you and your family, maybe cut it down to 3/4 of a cup the next time you make it. If you cut down on sugar a little at a time, you would be surprised at how your taste buds get used to the slightly less sweet taste.

2. You can also leave off the cinnamon sugar topping, or just sprinkle the tops of the unbaked muffins with cinnamon alone.

Surprisingly buttermilk is very low fat and already very healthy for us. If you would like to replace the buttermilk, simply substitute an equal amount of almond milk, soy milk or coconut milk.

If you love these apple cinnamon muffins, you just have to browse our muffin recipe collection here. 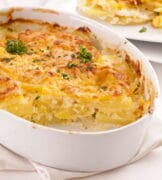