This information is per serving.

You can make this Mexican quinoa recipe as mild or as spicy as you like. I prefer non-spicy myself, but I know much of the world loves hot and spicy food. This recipe allows you to choose your heat level.

Quinoa is a fantastic grain. It’s gluten free and has a higher protein content than most grains, so it’s great for diabetics and those who want to watch their carb count. (It’s not low carb though). Quinoa has a mild taste and it takes well to flavors that you add to it, so it’s great for hot or cold salads with veggies.

To cook the quinoa, rinse it first in a strainer (see notes below). Place it in a pot and add 2 cups of water or broth. Cover the pot, bring the mixture to a boil, then lower the temperature to low and let it sit for 15 to 20 minutes, until all of the water has been absorbed.

Meanwhile, heat about 2 teaspoons of oil in a frying pan to medium heat. Put the onion and garlic in the pan and saute for a few minutes to soften. Add the chopped carrots, bell peppers, hot chili peppers, cumin and cayenne pepper to the pan. Stir together well and cook for about 10 minutes.

Add the sliced cherry tomatoes and chopped cilantro before serving. Stir to combine into the quinoa.

How to Cook Quinoa:

Raw quinoa has a natural coating on it that can be bitter if you don’t rinse it before you cook it. Now you can see packaged quinoa in stores that has already been rinsed and it will tell you on the package that it doesn’t need to be rinsed before cooking. If yours doesn’t say that, I would rinse it. It only takes a minute and you will make sure the quinoa will taste great.

Cooking quinoa is easy and pretty much the same as cooking rice. Add 1 cup of quinoa and 2 cups of stock or water to a pot. Cover the pot and put it on a burner on high heat until it begins to boil. Then lower the heat to low and let the quinoa and water mixture sit at low heat, covered, for 15 to 20 minutes, until all of the liquid has been absorbed. Remove the pot from the heat, fluff the quinoa with a fork and it’s ready to use in whatever recipe you want.

If you want this recipe to be vegan, simply choose the vegetable stock instead of the chicken stock. All of the other ingredients are both vegan and gluten free.

We have another vegetable quinoa recipe here, this one with zucchini.

You can browse all of our other Mexican flavored recipes here. 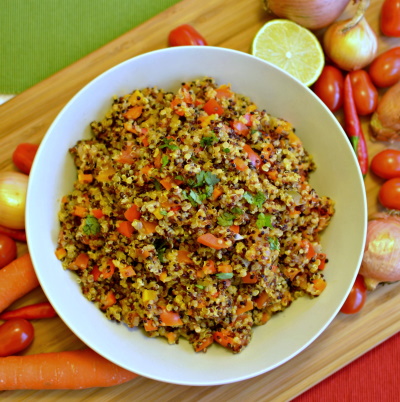