Rosti potatoes (or rösti as it is properly written) are a grated fried potatoes recipe that originated in Switzerland.

Rösti originated in the Bern region of Switzerland and quickly became a very popular potato recipe across the country. Of course anything that is really good spreads around the world these days so rösti potatoes are now enjoyed everywhere.

You can shred the potatoes in a food processor or using a box grater (which my Aunt Pauline calls a reibeisen in German). If you use a food processor, just make sure you don’t grate them too finely because they will be very wet and there is a chance they will turn out too mushy.

Some people pre-cook the potatoes, some use raw. I think it cooks up better if the potatoes are partially cooked before you shred them, so that is what I have indicated in the instructions below.

The recipe calls for the fried onions to be spread between the two layers of potatoes. You can mix them into the potatoes and cook it all at once, but the onions tend to cook before the potatoes. They will brown too much on the outside. It is best to cook them as it says above. 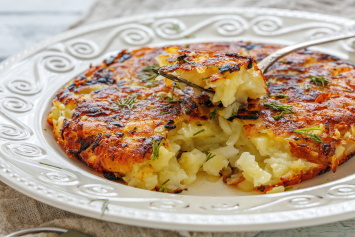 Rosti potatoes are a grated fried potatoes recipe that originated in Switzerland. They are crispy on the outside and soft and tender on the inside.

Browse all of our starch side dish recipes here.

Want to be the first to know about new recipes and articles on Cookingnook.com? Sign up here for site updates and never miss a great recipe.